A classic FF1M season is just around the corner, the 6th to be exact, although much of the 1988 season has disappeared into some sort of void, but anyway, let’s take a look at the potential frontrunners, midfielders, and the underdogs, and a wild stab at where the 11 teams may finish depending on how the ten races go. Warning – may contain probably inaccurate predictions.

Pedersen spent much of the 1989 season consistently running in the points before unreliability or mistakes confined them to 8th in the championship courtesy of Thierry Boutsen and Martin Brundle. This time around, they have switched to the Honda engines, one of five teams on the Japanese powerplant, but they also have the rather untested duo of Ivan Capelli and Roberto Moreno. The Danish team may have to rely on a few chaotic races to score some points… good thing Phoenix is up first!

The newest team in the FF1M universe had quite a debut in 1989 with Nelson Piquet taking two wins at Imola and Paul Ricard and forcing a championship showdown with Ayrton Senna, despite running the less powerful Judd engines. Laura Chung’s team have stuck with Judd and Stefan Johansson, but second driver Gabriele Tarquini is a bit of an unknown quantity, and like Pedersen, JGR Meister may need a few Phoenix-style races to score points.

Despite finishing last in the championship during 1989, Ajay Motorsports’ campaign could have been considered a decent one with Stefano Modena staying away from the chaos at Phoenix and Andrea de Cesaris putting in a superb drive at Paul Ricard to finish 4th. Ajay have kept the same driver line-up and have switched from Honda to Renault engines, which are promising improved power for 1990.

Despite a podium finish for Alessandro Nannini at the challenge streets of Monaco, 1989 was a bit of a trying season for Andrew Racing with only one other top ten finish courtesy of Rene Arnoux staying out of trouble at Phoenix to finish 4th. Like Ajay, Andrew Racing have opted for an all Italian line-up with Pierluigi Martini joining Nannini, and Ferrari engines could give the team more opportunities to score points.

The team run by Mitchell were absent during 1989 and last competed during the diminished 1988 season under Chaspenc. They have a strong engine underneath them in the form of Honda, and they would need to rely on that to pinch one or two podiums in the hands of Johnny Herbert and the unproven JJ Lehto.

Shake ‘n’ Bake had a reliability record that resembled that of a 1970s Lancia, with both drivers suffering multiple suspension failures throughout 1989. They were on course for last in the championship before a fluke win for Jean Alesi followed by a 2nd at Adelaide propelled them to 7th in the championship. Much of the status quo has been retained for 1990, but Alesi is joined by Riccardo Patrese, which should make for a decent and strangely poetic driver line-up.

FJR’s main weakness during 1989 was a lack of power from the Renault engine, which meant that despite having one of the strongest line-ups, no wins were recorded, although Alain Prost did throw away a potential home win thanks to a spin whilst leading. 1990 sees an all Brazilian line-up with championship runner up Nelson Piquet and the resilient Mauricio Gugelmin teaming up. It should be a strong line-up but FJR have opted for Judd engines, which are expected to be not as powerful as the Honda and Ferrari, and this may hurt FJR’s 1990 campaign.

Willows had a very evenly matched driver pairing for 1989 with Satoru Nakajima and Michele Alboreto scoring two podiums each. Although Alboreto scored a pole position at Monaco, it was Nakajima who outscored his Italian teammate by a single point come the end. The Japanese driver remains with Willows for 1990, but is joined by the Austrian prankster Gerhard Berger… talking of which…

Gerhard Berger was perhaps the surprise package during 1989, snatching a couple of wins for Gojira at Phoenix and Suzuka, the latter of which was a magnificent lesson in how to defend the lead as he fought off the charging Nigel Mansell and Alain Prost in the closing stages. Gojira ended that season only four points off of winning the constructors championship, and they can expect a similar season with an all British line-up of Nigel Mansell and Derek Warwick.

Although Tornado finished 2nd in the championship thanks to two drivers capable of scoring points, it was a case of what could’ve been after Nigel Mansell suffered some unfortunate luck with at least two races where the unofficial 1988 champion was put into the wall by Riccardo Patrese at Phoenix on the first lap, and then wiped out on the penultimate lap by a lapped Jean Alesi at Silverstone whilst in 2nd. Tornado have reunited with Alain Prost, who won the championship for them in 1986, and he will be joined by the consistent Thierry Boutsen, so Tornado should expect to fight for the championship.

If Darkfire proved at least one thing in 1989, it was that they didn’t need two drivers to win a championship as despite Jonathan Palmer not scoring a single point, Ayrton Senna amassed enough points to secure James Whiteley’s first championships in FF1M history. This was in spite of numerous electrical issues. Theoretically, Darkfire are the team beat in 1990 with Senna being joined by Michele Alboreto, who managed a couple of podium finishes and a pole position for Willows during 1989. Combine this with a Ferrari engine that should still be competitive, expect Darkfire to be at front. 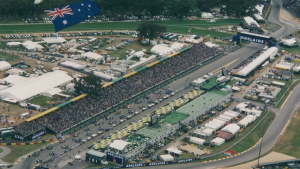