Just around the corner is the first round of the 2013 FF1M season, a season which promises action and unpredictability with a few regulation changes, the most significant of which being the way teams develop their cars in testing. Unlike previous seasons, teams develop their cars by how many laps their respective drivers accumulate rather than where they finish, although testing now runs in race configuration. Picking a winner will therefore be hard, but as the role of the commentator and general anorak, I must give it a go.

The team formerly known as Sean Connery Motorschhh and more commonly known as Gui Racing have showed incredible pace during testing thanks to a resurgent Sergio Perez. With Kimi Raikkonen showing that he can still win a race and a solid chunk of laps underneath them, this team is one of the two hot favourites for this season…

…the other team being Willows. Mercedes powered cars have shown strong form during pre-season with Nico Rosberg topping two of the test days. Hopefully for their sake, Rosberg will have a better pole-to-win record. 12 poles and only one of them was converted into a win… thanks to a Lewis Hamilton retirement. They also have Daniel Ricciardo, one of 2012’s revelations. It should therefore be a good fight against the legendary Brazilian team.

Having had a rather quiet Dubai test, FJR comfortably amassed the most laps in Bahrain to the point where they surged to the top of the lap charts. With the Honda now running a Works programme (Badged Mugen for sickeningly nostalgic reasons), Hamilton has a half-decent shot at defending his title, but it won’t be easy. Meanwhile Esteban Gutierrez makes his FF1M debut having mysterious lost the inaugural FFeM championship when he was spotted at Whilton Mill racing against a human-sized cone.

Being one of the earliest teams to develop their car has paid dividends so far for the Yorkshire team with some good pace from Pastor Maldonado during testing. This bodes well for a rather frustrated Sebastian Vettel, although they don’t have Works support from their Ferrari engine. They need a strong start to 2013, otherwise Courtney could end up destroying the commentary box.

Tobias’ outfit almost dominated 2012 thanks to a strong car and two very able drivers with a nearly 60% podium rate, but 2013 will be a sterner test with two French drivers yet to score an FF1M win and a customer Ferrari engine. Their car is strong at the moment, and I have a habit of getting predictions wildly wrong.

GRM appear to have a very good car underneath them with FF2M rivals Valtteri Bottas and Paul Di Resta showing some good pace during testing. They can certainly challenge for frequent podiums this season, maybe even a Bruno Senna-esque Monaco GP shock win.

Along with GRM, Horizon are contenders for the most improved team with some solid pace and a decent amount of laps from their drivers. With a bit of luck, they could score their first career podium… a Sam Bird win at Monaco perhaps, or maybe Adrian Sutil can mirror his 2010 Singapore GP masterclass.

Although they scooped up Fernando Alonso and Jenson Button on their FF1M return, Exolite haven’t exactly set the world alight during testing thanks to setting the fewest laps and restraining their race drivers. Alonso has the potential for a few good results, but their car might not be up for it.

Mitchell made the headlines in 2012 for all the wrong reasons thanks to their Toyota engine delivering horsepower equivalent to an American Miniature*. Although the Renault still appears to be down on power, the car appears to be a little bit better than last season’s… only a little bit though.

A strong start to the 2012 season ended up with the Renault engine trailing off as the season went on, and AndrewF1 really suffered from it. Early results show that improvements haven’t been obvious with work to do on the Renault powerplant. Newcomer Robin Frijns has a challenge on his hands, especially against his race-winning teammate.

Their Monaco GP win was certainly last season’s highlight, but their race engine was comprehensively outdeveloped by Ferrari and Mercedes. Being the only team with a BMW engine will certainly be a hindrance to the Danish team, and to make matters worse, they haven’t had the laps or the pace during pre-season testing. Expect a development season for this lot.

*A rather shoddy attempt at comedy by comparing an engine to an actual horse. 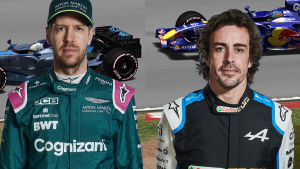