Benjamin Pryor will finally get his chance to race FF2M after a “dismal” performance for STV Racing at the Nurburgring has force a disgruntled James Brickles to make “immediate changes and amend the mistake of not putting him in the car in the first place.” The FJR test driver will make his debut at the supporting Portuguese Grand Prix.

The change comes after both STV drivers, Jolyon Palmer and Max Chilton, qualified poor poorly for the first feature race of the season, before both collided with each other at the Dunlop hairpin. Both drivers finished well outside of the points and then repeated their performance in the sprint race.

It hasn’t been confirmed which driver will be replaced and subsequently take Pryor’s FGT3 Supercup seat, but it is rumoured that Brickles will force Jolyon Palmer and Max Chilton to “make the decision themselves.” Brickles also stated that should both be unable to come to a resolution to race, he will contact Liam Neeson to “make sure of it.” Neeson has previous connections in the FF1M world as during the 2007 FF1M season, Shake ‘n’ Bake’s second driver, Gianmaria Bruni, ‘mysteriously disappeared’ after poor performances in the opening races. 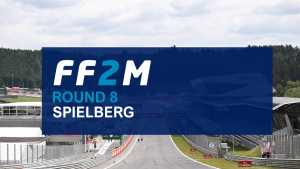